You are here: Home / Our Home / BATHROOM REMODEL – DIY OR HIRE OUT + THE DESIGN
Share
Tweet
Pin

2 of 5 in the bathroom remodel series

In part 2 of our bathroom remodel series, we’re talking about our decision to tackle this project on our own. The life event that occurred making this possible and what we decided to hire out in the end. I am also sharing the mood board and inspiration for the space!

When life throws you lemons, diy?

So we had a game plan. We knew the layout and the must-have items for the bathroom remodel.

What we didn’t know was the exact timing for kicking off this project.

Around the time that we started to seriously think about remodeling in early January 2016, we also knew that Mike could potentially be laid off.

His company was going through a sale and we knew around the close of the sale, slated for 3rd or 4th quarter, he could potentially be out of a job.

If he did get laid off, Mike would tackle the bulk of the remodel on his own while hunting for a new position. This would save us a ton of money, helping us to stay on budget.

to diy or hire out….

MIKE WAS LAID OFF.

BUT this actually turned out to be a blessing when all was said and done.

Since the sale wasn’t set to close until the or 4th quarter, we had time to prepare. Also, now that Mike would be home for an extended period of time, he was able to take on the majority of the bathroom remodel himself. This was something he hoped he could do to help us save money.

Without us realizing, the stars were aligning in more ways than one.

Even though we didn’t know how long it would take him to find a new job, we figured we would have at least enough time to get a good head start and could outsource the rest if needed. Also, we had the luxury to his job hunt a bit giving us more confidence in this decision.

Mike ended up having around four months to tackle this project. It didn’t take us the full four months to remodel the bathroom though, but it was close!

We have family that comes into town every year for the holidays and had a hard deadline to be done before then.

Having four months though gave him some time to decompress, work on the bathroom remodel, oh and job hunt.

What we decided to diy

Now, don’t tell my husband I said this, but I wasn’t sure that this was a project he could tackle on this own. I will also say that I did vocalize this at times and each time I was met with a look of disgust and an “I’ll show you” look.

And you know what? He did show me!

He did AMAZING and he did most of it by himself!

Applying what he did know and YouTubing his way through the rest, Mike kicked off demo on the bathroom on Saturday, September 17, 2016. We wrapped up just in time for our family to arrive before Christmas!

By the end of the weekend, we were down to the studs. From there, he tackled:

When we started planning for this project we knew that we most likely would need to replace the subfloor.

When we purchased the house you could see that in spots around the toilet and the half wall separating the shower from the toilet, there was some water damage.

The linoleum looked discolored in these areas and the paint on the wall was bubbling and cracking towards the bottom.

When we started the demo, we saw that the subfloor underneath was indeed rotting in places. It had some water damage in spots from leaks and would need to be replaced.

Also, the subfloor underneath was too thin to support the new tile we would be adding and would all have to go.

While replacing the subfloor, we also had to add additional supports by the toilet and the shower. Since we were not rebuilding the shower wall and pulling up the subfloor underneath this wall, we needed something to support and nail the new floor to at this intersection.

Two additional cross joints by the toilet and shower gave us the support we needed.

Adding new insulation to our walls and ceiling

The insulation in our exterior wall was falling apart and old. Since we had the wall open and down to the studs, we decided to go ahead and add all new insulation.

We also added insulation in our ceiling to help regulate the heat in the space since part of our attic is above this room.

The tile in our shower was pretty gross. The grout had crumbled in spots and was moldy and black in places. We knew that this was probably contributing to the water damage we were seeing at the base of the wall between the shower and toilet.

When we redid the walls in the shower, Mike chose USG Duralock Cement Board as the base for the walls. It is water durable and mold resistant and provides a good base for which to apply tile to.

For the rest of the walls and the ceiling, we used mold and moisture resistant drywall sheets. Mike did all the tapping and mudding himself.

He is a perfectionist when it comes to this kind of thing which I am super thankful for! Having a great base to start with was key to creating walls that would accept paint without creating or highlighting blemishes or cracks from the screws and tape on the walls.

We sourced tongue and groove pine from Hartville Hardware to use on the lower half of our walls to add interest.

Originally we were thinking of staining the walls but decided to paint in the end. You can read all about our decision to paint in this post.

Painting is something we have always tackled in our spaces and don’t mind doing ourselves. Sometimes we are fortunate enough to receive help from my father-in-law or my mother-in-law when they are able.

When my plan to stain the wainscoting did not work out, we quickly shifted gears and painted both the upper portion of the walls and the wainscoting with Sherwin Williams Emerald paint in Alabaster with a satin finish.

The wall above the toilet is also painted with Sherwin Williams Emerald paint but the color is Rasin with a satin finish. This may change though once we work out some remaining details in the space. My hope is to add shelving to this area to give us some additional storage.

what we decided to hire out

We ended up hiring out the tile work in the shower as well as for the floor. I have no doubt that Mike could have figured this out, but he was running out of steam and the holidays, and our hard deadline, were fast approaching.

We also had a plumber come in to move and add additional plumbing for the second sink and to do the install and hook up when we were ready.

An electrician came out to install a much needed can light over the shower stall and an exhaust fan in our bathroom. He also did some minor rewiring to allow for the sconces above the mirrors. He added additional switches so we could control the amount of light in our space.

We decided to add two additional switches. Now we have one switch to control the overhead ceiling light, another switch for the sconces over the mirrors, and the third switch is for the new can light and exhaust fan. We could have put the exhaust fan on its own switch, separate from the shower light, but I thought that was a little overkill for the size of the room. I figured that the two of these would usually be used in conjunction anyways.

My father-in-law also came over to assist with holding up drywall, bringing lunch and offering moral support AND physical support when my husband fell partially through the ceiling into the kitchen…..yes this happened.

I still have damage from the incident as proof. He was/is fine, thankfully, but had some sore muscles from catching himself and pulling himself out.

Like most of my projects, there is typically some element that kick starts and influences the design of the space.

In this case, it was the floor.

I had been drawn to patterned floor tile for a while and had been seeing it all over Pinterest.

Photos like this, this and this one really made my heart skip a beat!

I loved the look of the encaustic, old world, Spanish looking designs, but most of the tile I was coming across, that I LOVED, was WAY out of budget.

So…knowing the hubby would say no way, I started the hunt for something more in line with our budget. I finally landed on a beautiful pattern that made my heart, and our budget, happy!

Once I had the floor tile locked down I worked on pulling the rest of the pieces together.

Below is a look at the mood board I created for the space!

Next up, I’m sharing our hunt for the perfect vanity and how it caused a major shift in the design and my sanity.

Are you a DIYer or do you prefer to sub out the work? 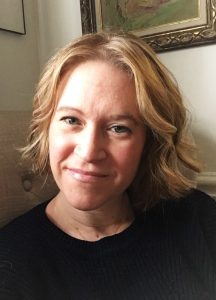 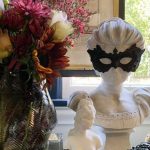 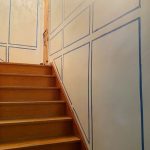 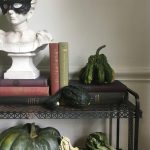 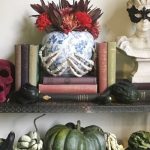 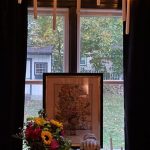